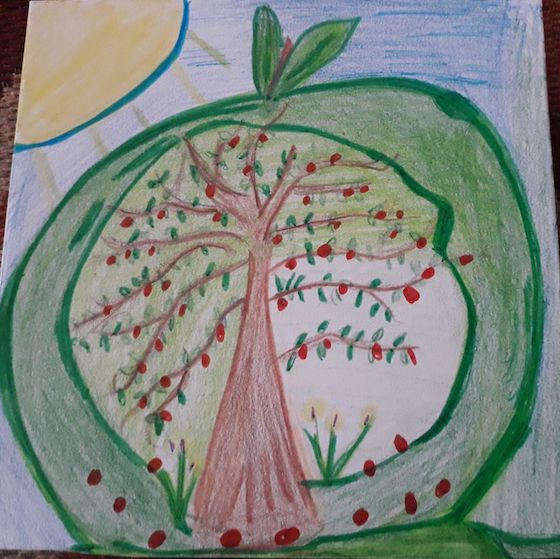 Isabella loved apples, all kinds of apples, pippin, golden delicious, Granny Smith, pink lady and well any apple she had ever tasted!

She had apple flavoured porridge for breakfast , apple and mars bar sandwiches for lunch and fried apple fritters for tea which she had with her apple and avocado milkshake .

Her mission was to taste all 7,500 varieties of apple before she was an old lady! But there was a problem . With so many people off work there wasn’t an apple left in Co Down .

How would she get her favourite food she pondered? There had to be a way! Her schoolbooks were spread all over her desk and she quickly searched for anything “ apple related! Eventually , in her geography book she found a place called Armagh, the orchard county!

She read how apples there were humongous , and that the giant Finn Mccool once used them as ammunition!
As if that wasn’t cool enough there were tales of an undiscovered apple .A special kind like no other in world.How could I get one, She pondered?… there had to be a way.

As evening came she noticed a small white plane buzz overhead and land the nearby airfield. She sent a letter instantly asking if someone could collect and deliver an Armagh apple in return for a share of the sought after, spectacular seeds. A few days passed, then a week, then a fortnight. Isabella only had two apples left. Then, one sunny morning She pulled back her curtains to the most staggering sight! . There, in her garden was the amazing , unusual ,undiscovered Apple with an internal tree , pretty flowers and enough seeds to grow two orchards!