The night in the Whimsical Wood 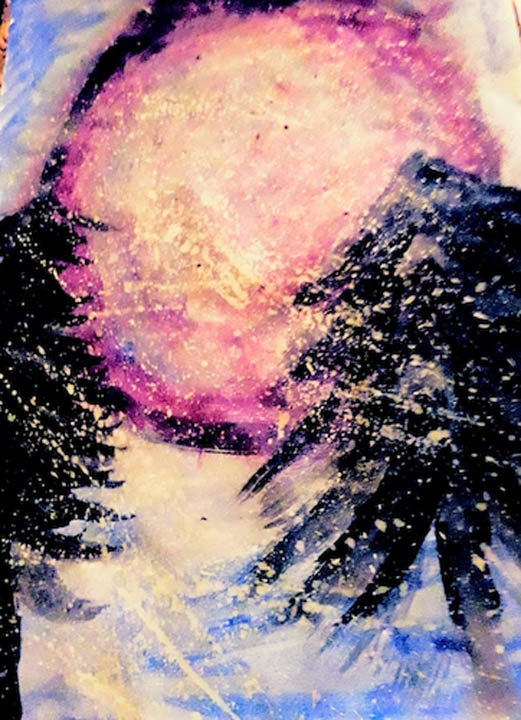 Many, many years ago before telescopes and technology people searched the stars to tell the about time and other things. There were no clocks , calendars or mobile phones back then. One Winters night in the high hills of Scotland star gazer Evan strode through the knee deep snow toward the Whimsical Wood.

Evan could spot the many star shapes in the sky on a clear night, he knew Ursa Major and Ursa Minor ( big and little bear) and he could pinpoint the very belt of Orion the Warrior.

As he brushed through the inky black trees he heard an eerie sound in the distance. He imagined it may just be the wind whistling but it continued to get louder and louder , and closer and closer! Evan froze. The ground began to shudder. It felt as though something would fall from the sky. The wind stopped and everything turned completely still. The sound of bagpipes echoed softly .

In the clearing a bright light appeared off the most marvellous gold and magenta. The orb grew and grew. Evan stared in disbelief. An elegant creature leapt from the glowing ball and danced in a glittery mist. Before him stood the most majestic creature in brilliant white with a spectacular spirally horn. It’s marvellous mane flowing as it galloped gracefully into the woods. To this day the people of Scotland still tell the story of their National animal, the Unicorn.