Let’s introduce you to the wonderful makers from Mourne……

NearyNógs is Northern Ireland’s first and only Chocolate manufacturer. They ethically source and import their own Cacao Beans from several origins, including Sâo Tomé, Dominican Republic and Ecuador, before hand-sorting, roasting, cracking, winnowing and stone-grinding the beans, and then tempering the chocolate.  This process gives them an award-winning high quality product guaranteeing an authentic chocolate experience.

“A home-grown family business based in South Down, Northern Ireland, we began the business as a means to an end in 2011.  The eldest Neary was leaving the comforts of home for the slums of Delhi India and needed funds.  Dorothy inherited the family recipe of chocolate confectionary via her mother and spontaneously decided to create chocolate to make funds for the trip to India.  The result was success, asked to do wedding favours following this event and markets, the business grew.

“About this time, another of the Neary daughters became ill, needing specialist treatment regularly from Great Ormond Street Hospital, London.  This forced Mr. Neary to have to leave his job and join the business to help have flexibility and support family care and interests.  The Neary’s decided to pioneer something new, as more and more people were asking for a chocolate without additives.  The first stone grinder was purchased to produce 2kg of chocolate over 3 days at a time, but this empowered the production of chocolate “without” additives.

“The NearyNógs team have now finished upscaling their machinery to produce even more high quality chocolate goodness at a capacity that was thought impossible only a couple years earlier.  Since 2011, we have won awards, sold chocolate to Brussels in Belgium, we sell locally, nationally, U.K., Europe and sometimes further to N.Z. Australia and U.S.A.

The man responsible for spreading a little sweetness around the Kingdom of Mourne!

Jeffrey Maginn, head beekeeper and proprietor at Mourne Honey. A Mourne man himself, Jeffrey embarked on a bee-keeping course ten years ago and quickly developed the skills required to produce this sought-after stuff.

The process takes patience and persistence and is largely influenced by the weather. Jeffrey’s honey is of the purest form with absolutely nothing added. You may in fact notice some crystallisation through the fitting little glass jar, which is testament to its authenticity!

Used as a natural sweetener, it promises to perk up your porridge and hype up your ham – a firm favourite in the kitchen. Local, pure honey is also renowned for its medicinal purposes and features in many traditional remedies.

Piera Cirefice is a freelance illustrator based in the UK, with a BA (Hons) degree in Illustration from Falmouth University.

Having graduated with a degree in illustration and a love for the great outdoors she found inspiration for her work both in the Mournes and further afield. Piera uses traditional methods such as watercolour to capture her wonderful images. Working en plein air her portrayal of landscapes, flora and fauna are simply stunning. Her unique style is instantly recognisable ,atmospheric and ever popular.

With an impressive range of original paintings, bespoke commisions,  classic enamel mugs and mounted prints her work is sure to intrigue and capture the eyes of many. 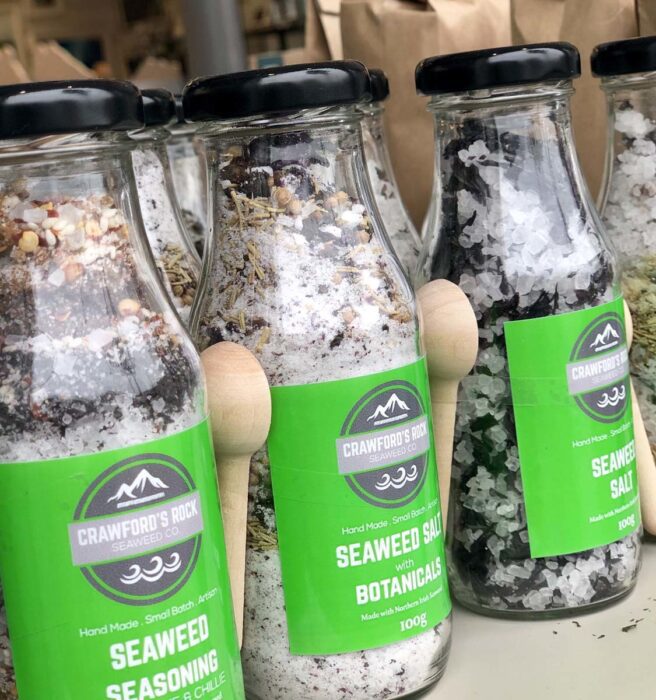 The super seaweed hand-gathered from the pristine waters around the area called Crawford’s Rock off the County Down coast is the main ingredient in this range of small batch, hand-made seaweed products, like seaweed shots for juicing and smoothies, seaweed infused oils for cooking, and flavoured dipping oils for breads.

Crawford’s Rock has a range of Seaweed Salts, Seaweed Botanicals, Seaweed Seasonings and Seaweed Sprinkles as well as a Seaweed Capsule they call ‘Vitamin Sea’.

Michelle and her team know all about harnessing the power of this natural superfood, full of iodine, B12 and other minerals and trace elements. They also sell the raw product and organise foraging courses.

Paul Van Gelder is a Californian with more than a passing knowledge of chilli, herbs and spices. He’s a complete encyclopaedia. He has brought his decades of experience in American barbecue and savoury seasonings to his wife Barbara’s home town of Kilkeel. It is the HQ of Red Dog Artisan Foods, and it is where they make their magical sauces, rubs and salts.

Tricks like soaking chillies in coffee the Texan way and knowing where to get the best seaweed for their salts have led to a clutch of Great Taste and Blas na hEireann Awards. If you don’t like chilli, worry not – the Californian sauce has none at all. We just adore it on chicken, pork, beef….

The Sour Cherry jelly is superb as a cheesecake topping. Who knew? Work your away around as much of their range as possible and discover worlds of new flavours.

WANT TO GET YOUR HANDS ON A ”TASTE OF THE MOURNE’s”?