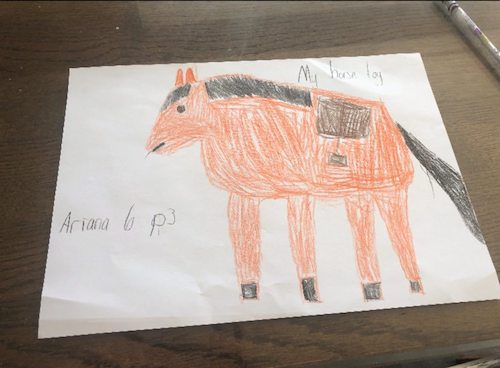 Ariana loved lots of things. She loved long rides on her bike and a tasty picnic after. She loved doing cartwheels in gymnastics and seeing how strange the garden looked when she was upside down.

She loved licky cuddles from Penny her dog and Penny loved the picnic days and gave extra licky cuddles after a chicken sandwich. Most of all, in all the world, Ariana loved Sassy.

Sassy had four long legs, a fringe called a mane, a swishy tail and a soft velvety nose that loved to nuzzle Ariana’s hand for chopped apple. Can you guess what Sassy is? A horse!

Ariana was such a lucky little girl to ride up high upon Sassy’s back and look down at the far away grass or listen to Sassy’s hooves clip clopping in the yard. Ariana brushed Sassy until she shone and Sassy loved her little human because she always had a treat for her.

Sassy’s beautiful brown eyes looked into Ariana’s bright blue ones and snuffled and whinnied gently into Ariana’s neck as she hugged her. One hot summer night Ariana just couldn’t sleep. She tossed and turned and threw the sheet off the bed but nothing helped. She went to her window and opened it to catch a breath of fresh air.

The sky was starting to lighten and she could see the beginnings of another hot day. The dawn sky was tinged with blue and orange and pink and in the distance she could see the brightness of Venus and Jupiter having a last shine before the sun took over.

Suddenly something sparkly caught her eye. Ariana rubbed her eyes in amazement for there, standing in Sassy’s favourite place in the field was a UNICORN. “I must be dreaming” said Ariana to herself. The pale morning sky glinted off the Unicorn’s beautiful purple and pink mane as she gently nibbled the morning dew off the grass.

As Ariana gazed down from her window in amazement at the Unicorn, the Unicorn lifted her head and looked at Ariana. “Hello Ariana” said the Unicorn. Ariana could hardly speak. “How do you know my name?” she whispered “Oh Ariana, I know your name, I know your eyes, I know how carefully you chop my apple and I know how you love to sit upon my back on your shiny brown saddle.” “But I do all that for Sassy” said Ariana.

The Unicorn looked up into Ariana’s blue eyes and Ariana saw the familiar brown eyes of her very own friend Sassy. “How can this be?” said Ariana “Only those with a pure heart and kindness in their eyes can see me and it must be at dawn because the dawn dew is magical and gives power to Unicorns!” Ariana hugged herself with delight; her Sassy was really a Unicorn. Slowly the sky changed colour from pink and orange to pale blue. “Morning is here and I must go. Get back into bed and have a snooze for no one must see the transformation”.

Ariana climbed into bed, so excited that she thought she would never sleep but her eyes fluttered tiredly and she drifted off into the Land of Nod. When she wakened she ran to the window to see the Unicorn and there stood Sassy, neighing for her breakfast. Ariana’s spirits drooped, it was only a dream. She sighed as she went outside to fill Sassy’s bucket and give her a chopped apple.

As she held out her hand, flat as could be, Sassy pushed her velvety nose into the apple and looked into Ariana’s eyes. As the sun shone, Ariana saw the shimmer of the tiniest bit of purple and pink glitter as Sassy winked a magical wink and chomped contentedly on her apple.