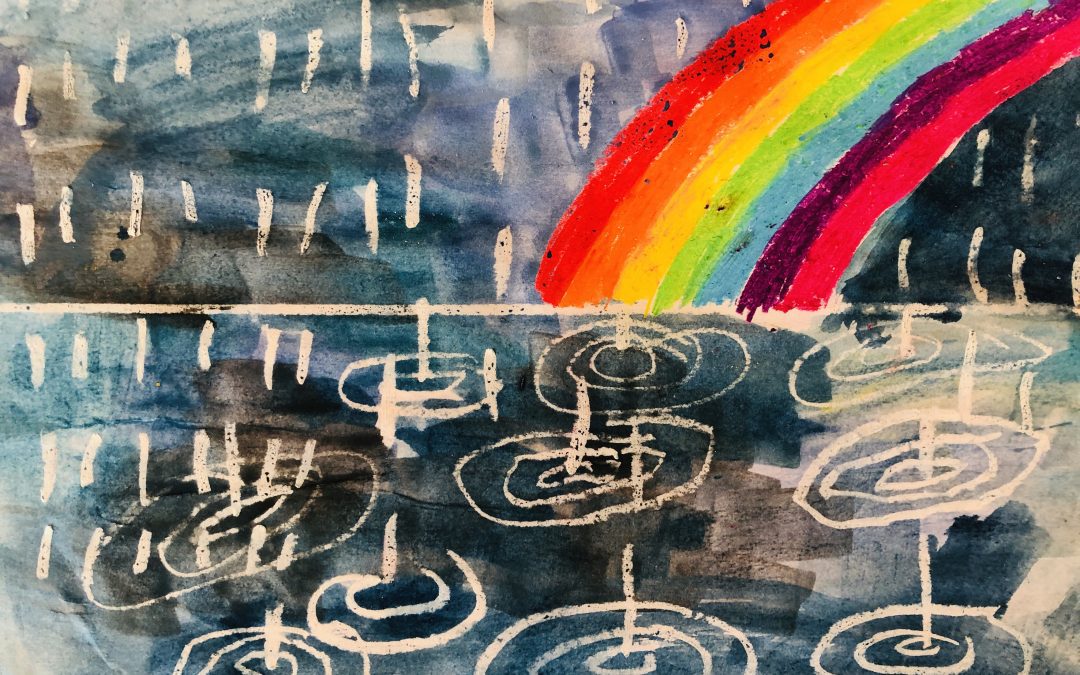 Penny was a creative and very arty little girl. She loved colour – vibrant colours, primary colours, neons, pastels , all sorts. Pennys work was so creative she was known as Penny Picasso.

Penny was fascinated with rainbows . She hoped that one day she would get super close to one ,closer than anyone ever had before.
When she told her friends what she hoped to do they all laughed because no one had ever touched a rainbow.
Penny wished very hard that some day she would be the first.

It was April and we all know about April showers don’t we? They happen very quickly and clear up in a jiffy!

Penny was outside in her yellow dotty wellingtons and raincoat when the cloud burst so she waited in her tree house for it to pass.

She watched the raindrops fall into inky puddles as some droplets raced down the glass pane of her tree house window.

Penny shook off her umbrella and played with her dolls until the rain eased.

All of a sudden she felt the warmth of the sun beam in followed by a multicoloured glow.
A rainbow had appeared, it looked to be in the next field , Penny dashed outside and ran her hardest to the bottom of her garden !
This was the closest she had ever been to one and she was determined to capture its beauty! She was running toward the house for her easel when….. WHOOSH!!!!!!

A gust of wind caught her umbrella and she was flying toward the rainbow , it was so bright.

Penny landed on a soft bouncy pillow of streaming colours! She was sliding along on a rollercoaster- a rainbow rollercoaster!
She couldn’t believe the sights as she sailed over Mourne. The cattle in the fields looked like little toys and she could smell the salty sea air as she passed Cranfield Lighthouse . The golden sand below glistened and the yellow whin bushes gave a coconut smell as she whizzed by . Trees of every shade shot up in the woods and sparkly streams squiggled below.

Penny landed beside the rose bush in her garden and rushed to tell Mum .
Her dream had come true!

She painted the most wonderful rainbow and put it in her window to remind the world that if we hope and believe wonderful things can happen !