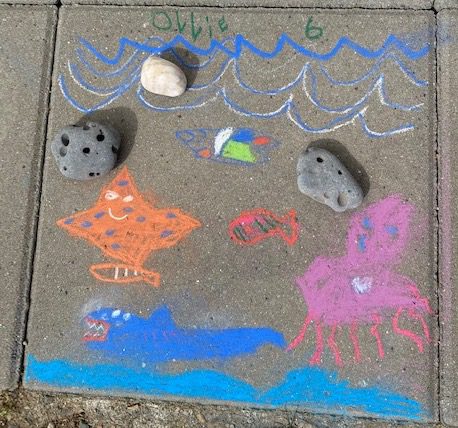 Ollie’s Adventure under the Ocean Ollie loved going to the beach! He loved the way some of the sand was like warm powder and some of the sand was like gooey, gritty mud. He loved the driftwood that washed up onto the beach and tried to guess where it had come from. Was it part of a giant’s door that had washed away in a storm? Was it part of an old boat that had outlived it’s usefulness and was slowly being broken up by the rocks and tides. Ollie lived the idea of the journey each piece of driftwood had taken.

Why it could be part of a raft from a desert island, washed ashore hundreds of years ago. Sometimes Ollie found small pieces of coloured glass, their sharp edges rounded and smoothed by years of being pushed along the ocean seabeds by the currents. What could they be he thought; part of a green glass bottle, empty and broken now but could have once contained a secret note perhaps from the people shipwrecked on that island. Ollie liked to think about the sea creatures and how they had been about for millions of years. He didn’t think even his mummy was THAT old. Ollie lay back on the picnic rug on the soft warm sand and slowly his eyes closed and he drifted off to sleep. “Hello Ollie, welcome to Jolly Jellyfish’s Underwater Bubble Tours”.

Ollie looked around and found himself in a little bubble underneath the waves. He could see the sandy seabed and lots of brightly coloured fish. Floating beside him was a very chatty bright pink jellyfish. Ollie’s eyes were as round as saucers, he just couldn’t believe what he was seeing! As they bobbed along, the jolly jellyfish explained all about each creature he spotted.

“Oh a STARFISH!” He shouted as a starfish drifted past. “Did you know that starfish aren’t actually fish?” said the jellyfish, “They are called Sea stars, isn’t that the most perfect name for them”. The jolly jellyfish went on to tell Ollie that starfish cannot swim but have hundreds of tiny tube feet which help them move and feed. Just with that a blue shark swam past. “Oh my!” said Ollie “Oh Hi Sydney” said the jellyfish to the shark. “Aren’t you afraid?” asked Ollie, he always thought sharks were fearsome creatures! “Well every creature can be fearsome if it feels threatened” said the jellyfish. “ Sharks have been living in the oceans for 450 million years” “Gracious, even my teacher isn’t THAT old!

Suddenly Ollie felt a bump and the underwater bubble turned itself around. “What’s happening” said Ollie. “The tide is changing and it’s time for you to go home” Ollie opened his eyes and saw his mummy taking some ham sandwiches and a Ribena juice out of the picnic bag. “You had a lovely doze” said mummy. Ollie drank his juice and wondered if Sydney Shark and Jolly Jellyfish liked Ribena as much as he did.