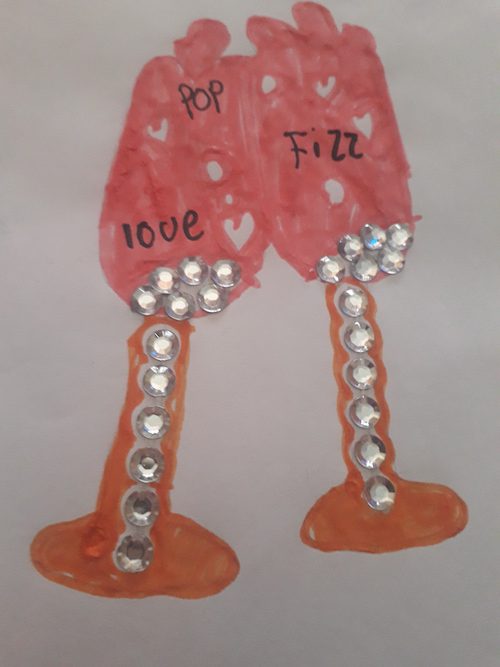 Once upon a time in a land far far away there lived a lonely witch in a little house right on the edge of the forest in Mourne Park. She hadn’t always been lonely, oh no she had once been a friendly happy witch who only cast helpful spells! Spells that helped people to paint beautiful pictures AND bake gorgeous chocolate cake. Soon the good townspeople were baking their own delicious chocolate cakes using her special recipe spell every day and didn’t need to go to the chocolate cake bakery.

The chocolate cakes in THIS bakery weren’t tasty at all. They weren’t made with a shake of love, a teaspoon of popping kisses and a fizzy hug. They weren’t even made with Neary Nogs chocolate!! No, these cakes were made by Cristabel Crosspatch. Crosspatch by name and Crosspatch by nature! Mrs Crosspatch was very jealous of the good witch and love that the townspeople had for her. “Fizzy hugs indeed” she shouted at her cat “whoever heard of such a thing”.

Every day Mrs Crosspatch became crosser and crosser until even the cat was scared. One day she had an idea. She remembered an old aunt of her mother’s third cousin had a neighbour who went to MOURNEWARTS SCHOOL OF MAGIC. Far too much niceness in this town she thought as she posted a letter to this wizard by Pixiepost.

A week later a package arrived! It was bulky and Mrs Crosspatch’s eyes lit up when she saw it. “So they think they can bake good chocolate cakes do they, I’ll soon fix that”. Out she went just at the edge of darkness as the sky was a dark witchy purple and saw all the chocolate cakes cooling on the windowsills. She tiptoed along and sprinkled some invisible powder onto each of them. Oh my! What a to-do!

The cakes were HORRIBLE. The townspeople were so enraged that they chased the poor good witch out of town. Well Mrs Crosspatch was DELIGHTED. “If you can find someone to give you some soppy popping kisses and some silly fizzy hugs then my power is gone! Good luck with that” she cackled and vanished into her bakery.

The poor good witch was so sad. She cried every day until one day, to cheer herself up, she decided to bake the tastiest most delicious chocolate cake in the world. So she did. She mixed and stirred and baked and shook all the love she had stored up right into it. As it was cooling on the windowsill a knock came to the door. A handsome stranger who looked as if he had travelled from a few mountains away was standing at her door. “I have walked a long way and am on my way to the Magic Market to sell my pink cordial but I would so love a slice of your chocolate cake in exchange for some of this cordial”.

He poured the pink cordial into 2 sparkly pink posh glasses. As they sipped their cordial and munched their cake, the good witch said “this is delicious, what’s in it?” “Oh a little bit of this and a sprinkle of that, a shake of love, some popping kisses and fizzy hugs, we all need a little of each in our lives” POW, CRACKLE, POP!! The spell was broken and they all lived happily ever after. It just goes to show, everything can be fixed with a hug and a kiss and some love in a chocolate cake oh and two sparkly glasses.