A Plane to Portrush 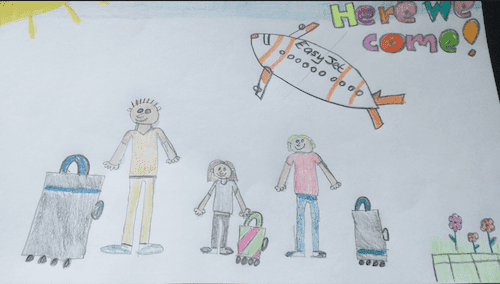 Holiday time had come around Myah and her grandparents felt a bit down.

Their sunshine vacation had just been stopped So they hired a small plane and aboard they all hopped.

“Buckle up“ said the pilot “It’s a beautiful day “ North bound to Portrush And the Giants Causeway. “Aha “ , said the pilot “There’s a great place to land, A long private beach with sugar white sand “ Myah opened her suitcase For buckets and spades Then off to the tide , the three of them raced.

Next to Barry’s Big Dipper and amusement arcade Myah screamed out loud on the ghastly ghost train! They had fried fish and chips with ketchup on top Then they bought sticky dummies and rainbow coloured rock. Back to the plane and up into sky To Dunluce Castle they decided to fly They heard tales of warriors , fearless and brave Then they noticed a signpost saying “Mermaids Cave. “

The Mermaids Cave lay underground Myah heard a gentle, enchanting sound Down the spirally steps to the cave below Myah , Nana and granda softly tiptoed. The door like a clamshell , was hidden in rocks And would only open when a special hand knocked Inside the cave , the wind whistled a tune And there were the mermaids, in their turquoise lagoon.

There were dolphins, sea horses and glittery shells The mermaids had so many stories to tell They all ate icecream in an oyster shaped bowl And they listened to tales of giants and trolls. The mermaids spoke of the times they’d been seen By the fishermen at Carrick-a- rede The spoke of the shipwrecks , long long ago And showed their collection of trinkets and gold . “Myah “ said Nana, “ Its time to go “ The mermaids gave Myah a shell to take home “When you get back , put this shell to your ear And the most magical mermaid singing you’ll hear”.