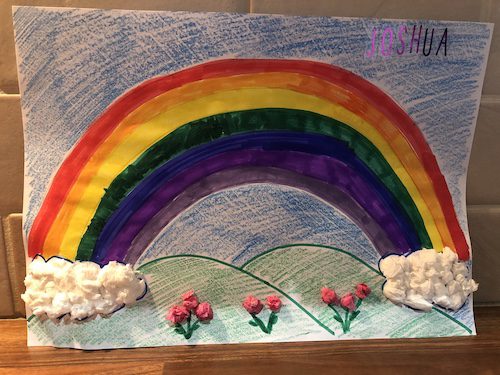 One day a small squirrel wakened from his cosy sleep and did the biggest yawn you can imagine. He looked around at his brothers and sisters who were still asleep and because he was the naughtiest squirrel, decided today was the day for A BIG ADVENTURE.

He scampered on, stopping now and again to look at the brightest flower and sniff the tastiest berries. All of a sudden he felt a big plop of rain in the end of his nose. Oh dear, he had never been out in the rain on his own before. One plop turned into two and then ten. The small squirrel was very frightened. He didn’t know what to do because his mummy had always kept him safe. He was VERY wet and VERY afraid.

He ran under a big blade of grass and shivered. His tummy rumbled sooooo loudly that a mummy badger poked her head out of her burrow. “I’m afraid and I’m lost and I’m hungry” cried the small squirrel. “You have been a very silly boy. Don’t you know there are dangers in the forest for little squirrels and your mummy will be so worried” The little squirrel cried even louder.

He had never seen anything so beautiful and so brightly coloured. Soon he could see his home and his mummy and his brothers and his sisters. How worried they had been and how silly he had been. As he tucked into his bowl of hot nutty porridge, he knew he would never forget about the magic rainbow path that took him home.